AIFF Director of Programming, Joanne Feinberg, reflects on the inaugural Daedalus Film Fest, taking place August 16 – 18, 2013 at the Varsity Theatre in Ashland, OR. The program includes five documentaries about the ongoing global HIV/AIDS crisis. All proceeds benefit the Daedalus Project. 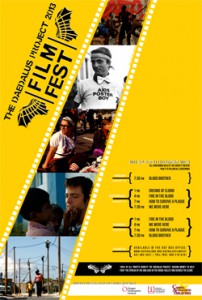 When Eduardo Placer, an Oregon Shakespeare Festival Company Member, and the 2013 Daedalus Project organizer, contacted the AIFF last spring about the possibility of partnering to incorporate film into the weekend of activities that raise funds to end the spread of HIV/AIDS, we jumped at the opportunity. Fast-forward a few months, and we are just days away from Opening Night of the first-ever Daedalus Film Fest, August 16-18, at the Varsity Theatre on Main Street in Ashland. It was an interesting challenge to program a slate of films that specifically address HIV and AIDS. I discovered that there haven’t been very many films produced on the subject recently, although those that are available are truly outstanding. Much of the focus of filmmakers is on the crisis internationally, as there is an enormous need for education, medicine and services in Africa and India at this time. But I have learned through work on this project that the need here in Southern Oregon to assist people living with HIV/AIDS is substantial as well. This year’s fest consists of five thought-provoking, haunting, celebratory, and inspiring original documentaries about the ongoing global HIV/AIDS crisis, and most will be screening for the first time in the Rogue Valley. A description of all the films, with trailers and links to purchase tickets can be found here. And speaking of firsts, I will be missing most of the Fest as I attempt my first 100K (62 mile) trail run on Saturday. I don’t normally mix my programming and running endeavors, but today am asking that you consider supporting the efforts of the Daedalus Project by donating to The Wings of Daedalus campaign on indiegogo. One hundred percent of all profits raised over the past 25 years through the Daedalus Project (a grand total of $1.3 million!) have been awarded to HIV/AIDS related charities both locally, and throughout the global community. A $5 donation “buys” an origami feather that will be incorporated into the Wings of Daedalus being built by artists in the OSF prop shop to be unveiled during the weekend. And although feathers may not help me fly 62 miles to the finish of my run, the thought of your support of this community effort to end the spread of HIV/AIDS and to assist those who are living with the condition will certainly inspire me on my way!