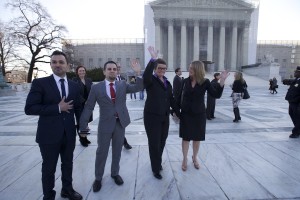 The 2014 Lifetime Achievement Award was presented to two-time Academy Award® winning Director Barbara Kopple. Kopple received an Oscar® in 1977 for Harlan County USA, which screened at the Festival, and again in 1991 for American Dream. Kopple’s many award-winning films include Shut Up and Sing; Woodstock: Now and Then; and Wild Man Blues. Kopple’s latest documentary, Running from Crazy, also screened at the Festival.  The film examines the personal journey of writer, model and actress Mariel Hemingway, the granddaughter of Ernest Hemingway, as she strives for a greater understanding of her complex family history.

Earlier in the week, the AIFF presented a 2014 Rogue Award to Ty Burrell. Ty has appeared in blockbuster hits such as Black Hawk Down (2001), Dawn of the Dead (2004), and The Incredible Hulk (2008) and is the voice of Mr. Peabody in the upcoming Mr. Peabody & Sherman. Most know him as the funniest father on television, Phil Dunphy. But Ashland audiences got to know the man behind Phil, the Emmy Award® winning performer who grew up in Ashland, during A Conversation with Ty Burrell held on Saturday, April 5 at the Historic Ashland Armory. Ty and his childhood friend, Miles Inada, Professor of Art and Emerging Media at Southern Oregon University, engaged in an insightful and thoroughly entertaining discussion.

Putting the spotlight on a filmmaker making a unique contribution to independent film, the AIFF presented Mark Monroe with a 2014 Rogue Award.  Monroe is the writing talent behind the Academy Award® winning film The Cove and the eye-opening Chasing Ice (AIFF12). Monroe was presented with his Rogue Award after the screening of his most recent film, Mission Blue.  Mission Blue is about legendary oceanographer, marine biologist, and environmentalist Sylvia Earle and her campaign to create a global network of protected marine sanctuaries. Monroe was also featured on the filmmaker TalkBack panel, Not the Same Old Story, examining the critical role of writing for documentary films.

The festival’s opening night film, The Case Against 8, directed by Ben Cotner and Ryan White, took home the Les Blank Award for Best Feature Length Documentary, bestowed by the festival’s jurors, as well the Rogue Creamery Audience Award for Best Documentary. The film offers a behind-the-scenes look at the historic case to overturn California’s ban on same-sex marriage. The filmmakers and two of the plaintiffs attended the festival and participated in a lively Q&A with audiences following the screening of the film.

Bluebird won jury prize for Best Acting Ensemble, with Hank and Asha receiving an honorable mention. Before I Disappear received the Gerald Hirschfeld A.S.C. Award for Best Cinematography and Drunktown’s Finest received an Honorable Mention. Hirschfeld was the 2007 A.S.C President’s Award Honoree and Director of Photography for films such as Young Frankenstein and My Favorite Year.

The complete list of 2014 AIFF award winners is listed on the festival’s website. Most Juried and Audience Award-winning documentary, feature and short films will receive encore presentations Monday April 7th at the Varsity Theatre. Tickets are available at the AIFF box office located at the Varsity Theatre in downtown Ashland from 9 am to 10 pm or may be purchased online at ashlandfilm.org. For more information and to read complete film synopses visit ashlandfilm.org.