Films From Around the World Selected to Illuminate, Delight, Inspire

Tickets go on sale the afternoon of Tuesday, September 8.

Films range from a feature inspired and acted by rural Senegalese villagers, to a wordless animated film from Brazil, to an American “hybrid” feature that interweaves documentary footage of filmmaker Alex Sichel coping with cancer with a dramatized version of her life, starring actress Lili Taylor.

“I tried to gather extraordinary films from all over the globe — to give Ashland audiences the opportunity to go on twelve unforgettable voyages in one week,” Herskowitz said. “The films have all been acclaimed by critics and audiences at international festivals, and are best seen, I strongly believe, on a big screen, among other cinephiles. We will also provide viewers with the interactive experience festivals are known for, with three guest filmmakers holding Q&As and, on one night, live music in the house.” 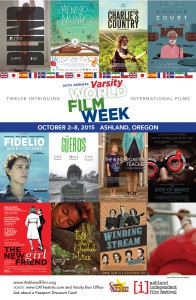 The films selected for the 26th Annual Varsity World Film Week represent 10 countries, including Brazil, Senegal, Norway, Mexico, France, and Israel. In the feature film “Charlie’s Country,” an Australian aboriginal warrior experiences the end of his traditional lifestyle. The Indian feature, Court, follows the case of an elderly folk singer and activist who is arrested on a trumped-up charge of inciting a suicide. A “devastating portrait of injustice and caste prejudice in contemporary India,” the film mixes both comedy and tragedy, and professional and non-professional actors.

The Look of Silence, a documentary about Indonesia, is a powerful companion piece to director Joshua Oppenheimer’s Oscar®-nominated film The Act of Killing, which also focuses on the aftermath of the 1965 Indonesian genocide. And Güeros is a comedic road movie that follows a couple of Mexican college students on a quest to find a folk-rock hero. Also screening are: Lucie Borleteau’s Fidelio: Alice’s Odyssey and Francois Ozon’s The New Girlfriend from France; the Brazilian animation Boy and the World; the Israeli feature The Kindergarten Teacher; the winner of the Sundance World Cinema Screenwriting Award, Blind, from Norway; and a documentary about the lives of the Carter and Cash country music dynasty, The Winding Stream, directed by Beth Harrington.

In addition to the films, the week will include a live performance of country music by the local acoustical folk trio The New Autonomous Folksingers in the Varsity Theatre before the 6:50 pm screening of the Saturday, October 3rd Carter/Cash documentary. And three directors will be available after selected showings to discuss their work with audiences. They are: Jeremy Teicher (Tall as the Baobab Tree), Beth Harrington (The Winding Stream: The Carters, The Cashes, and the Course of Country Music), and Elizabeth Giamatti (A Woman Like Me). Giamatti will participate via Skype.

The week of festivities kicks off with the Ashland Independent Film Festival’s Annual Fundraiser – REEL to ROGUE — an auction and sit-down dinner with an international flair at the beautiful Ashland Springs Hotel on October 1st. Tickets to this popular fundraiser are now on sale through www.AshlandFilm.org.

All films at the World Film Week will be shown between the hours of 12:50 pm and 9:30 pm from October 2nd through October 8th, at the Varsity Theatre in downtown Ashland, OR. Synopses of the movies, along with trailers, critical reviews, and a downloadable brochure and film schedule can be found at www.AshlandFilm.org.

This year also brings a new special discount card. The $40 Varsity World Film Week Passport is good for six films ($6.66/film). However, Ashland Independent Film Festival members, seniors, students, active military and children can purchase a Passport for only $35 ($5.83/per film). The price for a single film ticket, without a Passport, is $8.50 or $7 for AIFF members, seniors, students, active military and children. To become a film festival member and take advantage of discounts and more visit www.AshlandFilm.org. NOTE: Passport discount cards can only be purchased in person at the Varsity Box Office. Passports may be used to buy tickets for individuals other than the cardholder.

Tickets for individual showings will be available online at www.CATheatres.com.

NOTE: Not all films have been rated.

The Ashland Independent Film Festival is a widely recognized and highly regarded film festival, screening 90-plus independent documentaries, features, and shorts over 5 days at the Varsity Theatre, the Historic Ashland Armory, and the Ashland Street Cinema each April. Praised by filmgoers for the intimate access it affords to filmmakers, and by filmmakers for the warm and intelligent reception given to filmmakers, the Ashland Independent Film Festival was named one of the “Top 25 Coolest Festivals in the World” by MovieMaker Magazine, and holds the number one spot in the “Best Places to Live and Work as a Moviemaker in 2015, Top Towns.” The National Academy of Motion Picture Arts and Sciences and the National Endowment for the Arts have each twice awarded AIFF with rare festival support grants. For details, visit www.AshlandFilm.org.

Coming Attractions Theatres, Inc. was founded in 1985 in Ashland, Oregon when the company’s founder, John C. Schweiger, settled in Ashland and developed an interest in the local movie theatre, the art deco Varsity, built in 1937. After renovating and operating that one theatre, Mr. Schweiiger’s enthusiasm for film exhibition drove his company’s expansion to include 18 theatres in smaller- to medium‐sized markets up and down the Pacific Northwest (Washington, Oregon, Northern California, and most recently Alaska).