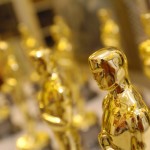 Nominations for the 85th Academy Awards® were announced this week and many AIFF alumni are headed to the Oscars in February!

Our Monthly Film Series selection “Beasts of the Southern Wild” received four nominations:  “Achievement in Directing” to Benh Zeitlin; “Best Motion Picture of the Year” to Producers Dan Janvey, Josh Penn and Michael Gottwald; “Adapted screenplay” to Lucy Alibar & Benh Zeitlin; and last but not least “Performance by an Actress in a Leading Role” to Quvenzhané Wallis! We had a wonderful Skype Q&A with Producer Josh Penn following the screening of “Beasts” last August.

We hope you will join us to celebrate our Alumni at Hollywood’s biggest night on Sunday, February 24th. Gather with other film lovers to watch the 85th annual Academy Awards at The Historic Ashland Armory. The black-tie optional evening will feature an elegant dinner and dessert by A’viands, a selection of the Valley’s finest wines, a signature cocktail created by Organic Nation, and Noble Coffee. The gala includes a live auction, raffle, and prizes. Tickets available soon at ashlandfilm.org.