The AIFF was awarded a $25,000 Grassroots Grant from the Meyer Memorial Trust to support general operating expenses associated with producing the 13th annual Festival, which takes place April 3 – 7, 2014. Read the details. 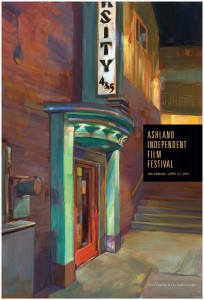 Ashland, Ore.—The Southern Oregon Film Society, the nonprofit arts organization which operates the Ashland Independent Film Festival (AIFF), is the recipient of a $25,000 Grassroots Grant from the Meyer Memorial Trust to support general operating expenses associated with producing the 13th annual Festival, which takes place April 3 – 7, 2014. The mission of the AIFF is to celebrate the diversity of the human experience through the art of independent film – inspiring, enriching and educating audiences of all ages.

This is the third time in the AIFF’s history that the organization has received funding from the Meyer Memorial Trust, and it comes at a critical juncture as the nonprofit embarks on a multi-year strategic initiative to expand and diversify its audience. Earlier this year, the AIFF received an Economic Development, Cultural, Tourism and Sustainability Grant from the City of Ashland and an Arts Recognition Grant from the Oregon Arts Commission.

The annual film festival and year-round screening activities currently reach a devoted audience of approximately 10,000, most of whom are aged 55 or older and reside within a 50-mile radius of Ashland. An annual audience survey conducted by the Festival following the April 2013 event confirmed that attendees are very satisfied with the festival experience, with 94% indicating their intention to attend a future festival and 96% indicating they would recommend the AIFF to a friend. The AIFF hopes to leverage this positive momentum to fully execute on its mission to serve audiences of all ages. In particular, expanded outreach activities will be aimed at attracting a younger and more geographically diverse audience. Ultimately the AIFF hopes to increase the number of out-of-area attendees traveling to Ashland for the annual Festival and secure its reputation as a premier destination film festival.

In addition to the April showcase of 85+ independent films, the AIFF offers a selection of year-round screenings to area residents. This Thursday, November 14th, the AIFF and Coming Attractions Theatres will present two special benefit screenings of the acclaimed documentary GMO OMG. Winner of the Audience Choice Award at the Yale Environmental Film Festival, the film follows director and concerned father Jeremy Seifert as he searches for answers about genetically modified organisms and how they affect our children, the health of our planet, and our freedom of choice. Benefit screenings will be held at 5:30pm and 8:00pm at the Varsity Theatre, followed by a Q&A with filmmaker via Skype immediately following both screenings. Tickets proceeds will benefit the nonprofit AIFF, thanks to Coming Attractions Theatres and the filmmakers, and are available at catheatres.com or at the Varsity Theatre box office.

About the Meyer Memorial Trust: The Meyer Memorial Trust (MMT) is a private foundation and is not associated with Fred Meyer, Inc. In October 2013, the trustees awarded more than $2.1 million to nonprofit organizations in Oregon. Approximately half the funds awarded were made as Grassroots Grants, a program generally designed for smaller organizations. Since MMT began operating in 1982, they have awarded almost $607 million. Visit mmt.org/news/october-2014-awards-announced for the complete list of 2014 awards.

About the AIFF: The Ashland Independent Film Festival was founded in 2001 as the Southern Oregon Film Society, and continues to gain national attention as a successful regional festival. Over 85 independent documentaries, feature films and shorts will be presented at the 13th annual AIFF, April 3 – 7, 2014, with events at the Varsity Theatre, Historic Ashland Armory, Ashland Street Cinema and the Ashland Springs Hotel. Memberships for the 2014 festival are available now at ashlandfilm.org.