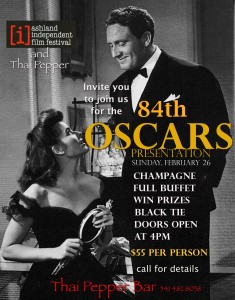 AIFF has lots to celebrate this Oscar season!

We are looking forward to a great event this Sunday, February 26th, at Thai Pepper’s Satay Bar! We’ll be gathering with other film fans to watch the 84th annual Academy Awards presentation, enjoy some tasty food, and benefit our favorite cause, the ashland independent film festival. Rumor has it there are just a few seats left, so if you’d like to join us, call soon: (541) 482-4058.

Two films from the 10th annual AIFF are among the nominees:

If a Tree Falls: A Story of the Earth Liberation Front, directed by Marshall Curry, is in the running for Documentary Feature.

The Barber of Birmingham: Foot Soldier of the Civil Rights Movement, directed by the late Gail Dolgin and Robin Fryday, contends for Documentary Short.

And we are delighted to announce that we have NINE Oscar-nominated films confirmed for the 11th annual AIFF:

Nominated in the Documentary Shorts category:

U.S. Army veteran Ethan McCord recounts his life-changing experiences at the scene of one of the most notorious events of the Iraq War: the slaying of two Reuters journalists, along with a group of mostly unarmed men, on the streets of Baghdad by American attack helicopters in July 2007.

THE TSUNAMI AND THE CHERRY BLOSSOM, directed by Lucy Walker (Waste Land, 2011 AIFF)

Survivors in the areas hardest hit by Japan’s recent tsunami find the courage to revive and rebuild as cherry blossom season begins. A stunning visual poem about the ephemeral nature of life and the healing power of Japan’s most beloved flower.

One of five live action short films nominated for this year’s OSCAR® and the only American film in its category.  It’s a delightful tale of a neurotic inventor who creates a time machine and gets lost traveling around yesterday.

An Irish coming-of-age story in which of a young boy learns how to rebel against his father and the community. Against his will, Damian Lynch is called in at the last moment to serve as an altar boy at an important mass in the local parish. He faces a choice: either conform to the status quo or serve an extended ban from his passion in life…football.

2011 Student Academy Award winner in the foreign film category and 2012 Nominee for Live Action Short.  A German couple adopts an Indian orphan in Kolkata. Their child suddenly disappears and they realize that they are part of the problem.

Based loosely on a real life event recounted in Paul Auster’s brilliant book ‘True Tales of American Life‘, ‘A Morning Stroll’ tells the story of one New Yorker’s early morning encounter with a chicken, an event that plays out over 100 years.

An beautifully animated story inspired, in equal measures, by Hurricane Katrina, Buster Keaton, The Wizard of Oz, and a love for books.

An 11 minute biographical documentary of Vera Klement, a painter in Chicago who is approaching her 80th birthday.

FATAKRA, Soham Mehta – 2011 Student AA winner
Soham Mehta is a theatre and film artist born in India but brought up in Houston. The film tells the story of Naveen, who left India to chase his dreams in America. Three years and a recession later, his wife and son join him.

In more local news, Southern Oregon Film and Television (SOFaT) is represented TWICE in the Oscars this year, as Gary Kout was the Production Supervisor on the live-action ‘emotion capture’ reference shoot for Rango nominated for Animated Feature Film, and Greg Eliason was the Natural History Producer for Tree of Life, nominated in the categories of Best Picture, Cinematography and Directing.

Member passes for the 11th annual AIFF are available now.

Complete film schedule will be available in mid-March. Individual tickets go on sale beginning March 20 to members, and March 25 to the general public.