Did you know? Matt Colwell, who makes his film debut as the older brother in Is This The Real World, is the incredibly popular Australian rapper, 360. He’s really good! Check him out.. 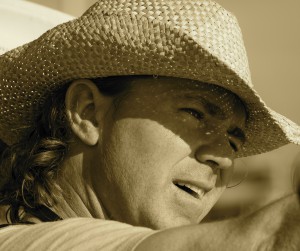 How did you get started in filmmaking?
Being a young kid who liked to stay up after midnight and lose himself in old films, most memorably Fred and Ginger films, and also lucky enough to catch a Michael Powell retrospective, was how the whole film virus infected me. I was lucky enough to get into a brilliant film school in Australia — Swinburne — and then from there spent twenty years in TV in a bunch of different jobs, from runner to writer to director and most things between. Film has always been the perfect synthesis of art forms for me; it combines the written word, photography, music, dramatic performance, and nifty-nerdy post-production technology to tell story. As impossibly difficult as it is to make films, and even more difficult to make a living making films, I can’t imagine aspiring to any different goal. The inability to think of something I’d rather do has been a sustaining force.

What was your biggest challenge in making Is This The Real World?
The biggest challenge still remains: Distribution. I feel blessed to have been able to assemble a team who contributed such brilliant work on this film. The score, the performances, the editing, the cinematography… all these elements which talented people added to my script were just joys to be a part of. The making of the film — very surprisingly — was the easy and fun part. Oh, except for the day we dropped one of our cameras into the ocean…that wasn’t so very fun. I had an amazingly supportive team around me all through the making of this film. I was very lucky to have Deb Barlow step into the role of producer. A smart, honest and talented producer makes a director’s life a dream. The not-so-smart, less trustworthy, and chaotic producers out there (and sadly they exist) make life a nightmare for all involved. The battle to get our film to audiences has been the hardest part. The fight for space on cinema screens is intense and the big guys have it all over us little guys. It’s for this reason that a festival like Ashland is so amazingly appreciated by filmmakers. Without the film-loving organisers of these festivals I’m not sure how the film-loving audiences would ever see films outside of the big studio releases.

What do you want Ashland audiences to take away from Is This The Real World?
Firstly an emotional experience…. and that emotion is empathy and some kind of bittersweet joy. My intention was to make a film about being a teenager, but to make it in a way that was more about our relationship with authority, and our ability to see past faults and find love. This film is firstly an emotional experience, but I hope it sparks intellectual discussions. And, as I can’t be in Ashland (damn it), if people enjoy the film I hope they jump on Facebook and let me know!

If you were a superhero, what would your super filmmaking power be?
Super-distribution power; the power to screen independent cinema in your local multiplex.

Martin talks more about Is This The Real World…
This is the story of a journey from childhood to the adult realm, and the intriguing tension of authority’s role in gaining independence. It is a narrative that everyone has some emotional connection to. Even the eternal teenagers amongst us have wrestled with the question of how to leave the summer days of childhood and enter the world of adults. This film unfolds gradually. It has a careful and deliberate pace that allows an audience to sit with moments while all the time building to a cathartic climax. It is an intelligent and emotional story that rewards an audience open to it.