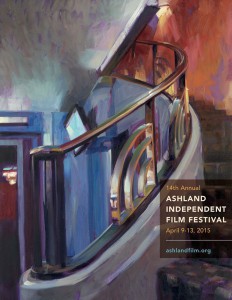 98 films with filmmakers from around the world

The Ashland Independent Film Festival (AIFF) today unveiled its complete program for the 14th annual Festival, to be held in the heart of historic downtown Ashland, Oregon, April 9-13. Over 7,500 film lovers are expected to gather for five days of world-class independent film at the Varsity Theatre, the Historic Ashland Armory, the Ashland Street Cinemas, and the Ashland Springs Hotel.

The Festival’s full schedule, film descriptions and program are available now at www.ashlandfilm.org. Tickets go on sale to members beginning March 16 and to the general public on March 22. 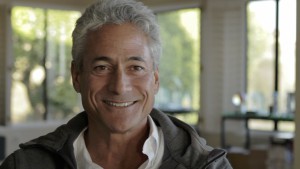 SPECIAL GUESTS
The AIFF will present four-time Olympic Champion Greg Louganis with the 2015 Rogue Award. In 1988, Louganis became the first man to sweep the diving events in consecutive Olympic games. His legendary grace, beauty, and courage sparked a worldwide fascination with diving. Louganis shares his story in the documentary Back on Board: Greg Louganis, directed by Cheryl Furjanic, which will screen at AIFF15. The film reveals the complicated life of the pioneering, openly gay athlete who revealed his HIV-positive status, at great risk to his career.

Award-winning Director Ondi Timoner will receive the inaugural AIFF “No Limits” Award in recognition
of her fearless and unique storytelling style, and passion to push her subjects and audiences
beyond their comfort zone. BRAND: A Second Coming, her latest film, will screen at AIFF15.
The film follows comedian, author, and activist Russell Brand’s (Forgetting Sarah Marshall) evolution
from a superficial Hollywood star and addict to a political disrupter and unexpected hero to the
underserved. Timoner once again demonstrates her bold approach to filmmaking and a commitment to transform and inspire.

WELCOME BACK
Three new documentaries come to this year’s film festival from AIFF Lifetime Achievement Award honorees. Two-time Academy Award®-winner and AIFF14 Lifetime Achievement recipient Barbara Kopple returns to AIFF with Hot Type: 150 Years of the Nation. This film captures the day-to-day workings of the legendary progressive magazine as it evolves into the future guided by its remarkable past. 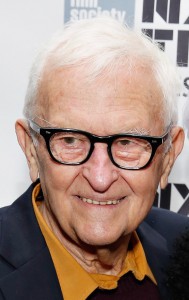 Iris, the most recent film from legendary documentarian Albert Maysles, will screen at AIFF15 on the Opening Night of the Festival. The 89-year-old filmmaker turned his ever-responsive camera on Iris Apfel, the fashion and interior design maven, who herself is just shy of 94. Maysles received the AIFF Lifetime Achievement Award in 2008. He recently passed away and will be honored at the AIFF Awards Celebration on Sunday April 12th.

The final film from acclaimed documentarian Les Blank, AIFF07 Artistic Achievement Award recipient, also comes to AIFF15. How to Smell a Rose: A Visit with Ricky Leacock in Normandy follows Blank as he visits trailblazing documentarian Richard Leacock at his home in France. Rustic meals and long walks blend with memorable moments from Leacock’s 70-year career. With the passing of both Blank (in 2013) and Leacock (in 2011), the documentary provides insight into the lives of two seminal figures in the history of film. Co-director Gina Leibrecht (All in This Tea) will be in attendance to share her experience of making the film with Les Blank.

DOCUMENTARIES
Holbrook/Twain: An American Odyssey
Hal Holbrook has performed his renowned one-man show Mark Twain Tonight! every year since 1954. A delightful behind the scenes look at America’s most esteemed satirist and the actor who has brought him to life. Also features Sean Penn, Richard Chamberlain, Annie Potts, and Martin Sheen. 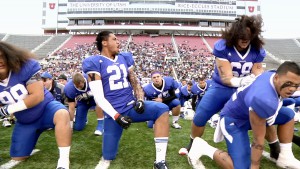 In Football We Trust

In Football We Trust
This film follows the journey of four charismatic and talented Polynesian high school students as they struggle to overcome gang violence, family pressures, and poverty to realize the American dream of playing football in the NFL.

James Baldwin: The Price of the Ticket
This award-winning documentary — beautifully restored from the original 16mm film — blends intimate interviews and eloquent public speeches with private glimpses of James Baldwin, exploring what it means to be black, impoverished, gay, and gifted. With Maya Angelou, William Styron, Ishmael Reed, and Bobby Short.

The Hunting Ground Sneak Preview
From the makers of The Invisible War (AIFF12) comes a startling exposé of sexual assault on American campuses, institutional cover-ups, and the brutal toll on survivors. The film follows a courageous group of women as they pursue both their education and justice in the face of harsh retaliation and harassment. Join us for an extended Q&A after the film with local area educators, experts, and activists, and learn how Southern Oregon University is addressing the issue with their model program “Campus Choice.”

OSCAR® WINNERS AND NOMINEES
The AIFF line-up includes a selection of Academy Award® nominees, providing a rare opportunity for Southern Oregon audiences to see these works on the big screen. 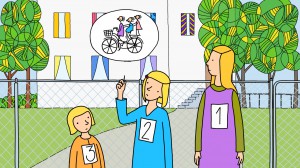 Me and My Moulton.

The winner of the Best Documentary Short Subject category, Crisis Hotline: Veterans Press 1, will screen at the festival with director Ellen Goosenberg Kent in attendance. AIFF will also screen the other nominated films in the category, Joanna, Our Curse, The Reaper, and White Earth. AIFF will also screen AYA, nominated for Best Live Action Short and four films nominated for Best Animated Short Film, The Bigger Picture, The Dam Keeper, Me and My Moulton, and A Single Life.

FAMILY FRIENDLY PROGRAMMING
The Festival’s popular “Family Shorts” program is a collection of delightful and engaging short films suitable for ages 5 and up. The program screens all weekend during the festival at the Ashland Street Cinemas. This season, the AIFF is excited to present the Oscar®-nominated animated feature, Song of the Sea. The film tells the poetic tale of Saoirse, and her brother Ben, who go on an epic journey to discover the secrets of their past. This delightful Irish legend features breathtaking, hand-drawn animation from the creators of the Academy Award®-nominated The Secret of Kells. 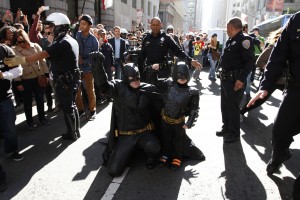 Batkid Begins: The Wish Heard Around the World.

The AIFF will also screen Batkid Begins: The Wish Heard Around the World. This film shares the heartwarming story of 5-year-old Miles Scott and how San Francisco transforms into Gotham City for a day. Recovering from leukemia, Miles dreams of being Batkid and the Make-A-Wish Foundation brings his dream to life, creating a worldwide phenomenon of love and joy in the process.

FEATURE FILMS
The AIFF again presents some of the best new feature film work available on the festival circuit.

Echo Park
Sophie (Mamie Gummer) leaves her seemingly perfect Beverly Hills life to get some perspective in Echo Park. There, she meets Alex, who’s about to move back to his native London. Their connection to each other and their eclectic neighborhood forces them to reassess where they belong.

Imperial Dreams
Bambi returns home from prison and learns that he’s the sole caretaker of his 3-year-old son. Though his chances for a legitimate life are challenged on every front, he finds hope where it is scarce and learns what it really means to be a father. 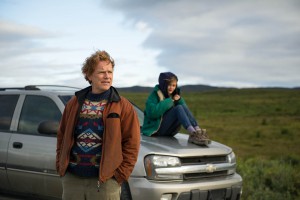 Wildlike
Mackenzie, a troubled teenager, is sent to live with her uncle (Brian Geraghty) in Juneau, Alaska. The relationship turns and she runs away. Lost and with no one to help her, she meets an unlikely father figure (Bruce Greenwood) with scars of his own. They cross the exquisite Alaskan wilderness and discover sanctuary along the last frontier.

FREE FILMMAKER PANELS
Three free TalkBack panel discussions will be held with filmmakers of all genres discussing their craft at the Ashland Springs Hotel on Friday, Saturday and Sunday mornings at 10am. On Friday morning, AIFF15 filmmakers disclose how a sense of place figures prominently in both narratives and documentaries in Casting the Location. Directors from Southern Oregon will also talk about filmmaking in Ashland, MovieMaker Magazine’s “#1 Town to Live and Work as a Moviemaker.” On Saturday morning the discussion shifts to the people at the heart of movies. AIFF15 directors discuss in depth the key role film subjects play and how this special connection is developed in Subject Matters.  Picture Diversity on Sunday morning explores the lack of diversity in the film industry, both on screen and behind the camera, and the challenges filmmakers face to encourage diversity.

AIFF will be offering a 2-hour filmmaking workshop from Rebel Heart Films, the new enterprise from Diane Bell and Chris Byrne who made the AIFF10 Juried Best Feature Obselidia. The workshop will inspire, encourage, and empower new filmmakers while also providing practical advice such as how to craft a successful screenplay; what to do in pre-production; the keys to success while shooting your film and how to enjoy one of the most memorable times of your life; and what to do once your film is finished.

Many screenings feature Q&A sessions with visiting filmmakers and film subjects. Audiences also have the opportunity to rub elbows with filmmakers over a late-night drink at the AIFF AfterLounge, hosted by a different restaurant every night.

Festival Memberships, tickets for Festival films and events, as well as more information about films, special events and parties and the Festival’s complete program are available online at ashlandfilm.org and at the Festival Box Office located at Kiosk on the Ashland Plaza, and at the Varsity Theatre April 9 – 13.