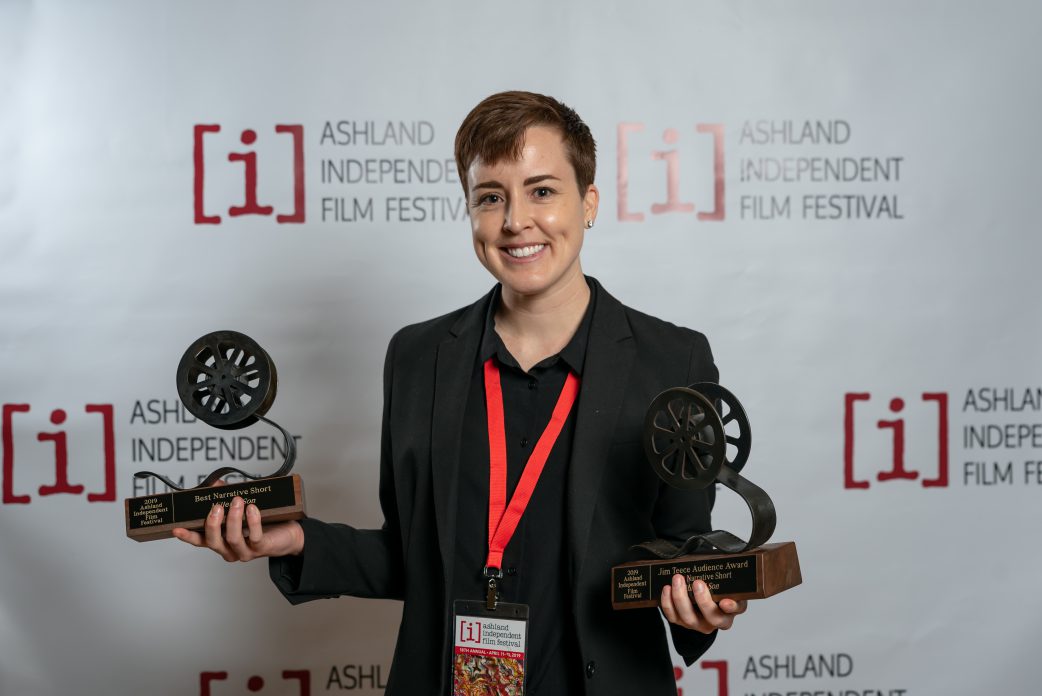 ASHLAND, Ore. – The Ashland Independent Film Festival (AIFF) wrapped its 18th annual edition, which ran April 11-15, 2019, screening over 150 films to audiences of over 17,000. On April 14 at its Awards Night celebration, the juried and audience award-winning films were announced.

The James Blue Award was presented to directors Alyssa Fedele and Zachary Fink of The Rescue List. This juried award is given to a filmmaker whose first or second documentary or narrative feature exemplifies the values of Oregonian director James Blue (1930-80), whose work addressed complex issues of social justice and social/political change. The award was funded by the James Blue Alliance in the amount of $2,500.

“I’m particularly pleased that we were able to introduce a new award, named after the influential Oregonian filmmaker James Blue that came with a cash prize” stated AIFF Artistic and Executive Director Richard Herskowitz. “To our delight, the filmmakers announced that they would be donating their prize money to the child rescue efforts their film had documented.”

Jurors Claire Aguilar of the International Documentary Association and filmmaker Barry Strongin, a student of James Blue, commented: “We believe James Blue would have greatly admired The Rescue List. The story about rescuing children who have been sold into bondage by their families is compelling. Kwame’s fearless, unrelenting search for boys on Ghana’s Lake Volta and its surrounding banks brings to mind the iconography of a Western with a hero-protagonist setting out to right a wrong and bring kidnapped children back to safety. The relationships depicted (parents and tribal leaders to the children, and the boys to each other) and the issues addressed through them are rich and complex.”

The Festival presented its coveted Rogue Award to two special guests, Alex Rivera and Cristina Ibarra. The Infiltrators, co-directed by Rivera and Ibarra, screened at the Festival along with Rivera’s Sleep Dealer and Ibarra’s Las Marthas. This year’s Pride Award was presented to B. Ruby Rich, a Professor of Film and Digital Media at University of California, Santa Cruz and Editor in Chief of Film Quarterly (UC Press. Credited with coining the term “New Queer Cinema,” she curated a mini-series within the festival titled “Queer Intentionality,” supported by a grant from the

Academy of Motion Picture Arts and Sciences. The Festival paid its “Indie Institution” tribute to Kino Lorber, Inc., a leader in distributing the finest art-house, classic and international films, including a special presentation of Highway

Patrolman with guest director Alex Cox. Other highlights included the world premiere of Gary Lundgren’s Phoenix, Oregon, Eleanor Coppola’s presentation of Hearts of Darkness on the occasion of Apocalypse Now’s 40th anniversary, and the opening night screening of Moonlight Sonata: Deafness in Three Movementsaccompanied by the family of director Irene Taylor Brodsky, who were the film’s subjects.

American Factory (Directors: Julia Reichert and Steven Bognar)
From the Jury: The jury has decided to give the Award for Best Documentary Feature to American Factory for creating a multilayered, engrossing, and poignant cinematic depiction of the cultural and working condition differences—many of the them incompatible—between the American and Chinese industries. Filmmakers Steven Bognar and Julia Reichert have created a complex intercultural portrait that it is not only funny, but timely, political, and eye-opening.

Special Jury Recognition: Grit (Directors: Cynthia Wade, Sasha Friedlander)
From the Jury: This poetic blend of artistic and political imagery is both powerful and restrained. Artfully shot and patiently presented; this portrait of a community’s response in the wake of devastating corporate greed and ecological disaster will haunt and inspire.

BEST DOCUMENTARY FEATURE EDITING
Pahokee (Directors: Ivete Lucas and Patrick Bresnan)
From the Jury: The success or failure of an observational-style documentary such as Pahokee is largely determined by the patterns and storylines discovered in the editing process. Chiseled from hundreds of hours of raw footage, the story structure of Pahokee was literally created in the editing room, and came together to craft a beautiful and poignant film.

Special Jury Recognition: One Man Dies a Million Times (Director: Jessica Oreck)
From the Jury: For its moving and poetic script, assembled from a variety of mid-twentieth-century Russian sources by director Jessica Oreck to remind us that the future of the planet depends on not forgetting the past.

BEST DOCUMENTARY SHORT
Dust Devil (Director: Poppy Walker)
From the Jury: Using sumptuous imagery from the past and present, Dust Devil is an exquisitely crafted, cinematic journey through one Broadway dancer’s dream — an opera house in the middle of the desert. Marta Becket tells her story with an intimacy and honesty that is timeless.

Special Jury Recognition: Forest on Fire (Director: Reed Harkness)
From the Jury: With curiosity, sympathy, and beautiful cinematography, Forest on Fire traces a flame’s ethereal nature. It unfolds candidly through a series of testimonies, revealing truth’s uncertainties and the challenges of holding others accountable.

BEST NARRATIVE SHORT
Miller & Son (Director: Asher Jelinsky)
From the Jury: The Narrative Shorts Jury Prize goes to Miller & Son for the film’s visionary storytelling, technical prowess, and empathy. This is a vital film that has the potential to start conversations about identity, transfolks, love, and family. This film has the power to affect hearts and minds.

Special Jury Recognition: Men of Vision (Director: Frank Todaro)
From the Jury: Men of Vision impressed the Jury in that it excelled in virtually every category for which the Academy of Motion Picture Arts and Sciences awards an Oscar.