ASHLAND, OR. – The Ashland Independent Film Festival (AIFF), scheduled for April 11-15, 2019, is presenting two special awards this year—the Pride Award to film critic B. Ruby Rich and the Rogue Award to artists Alex Rivera and Cristina Ibarra, directors of the Sundance NEXT Jury and Audience award winner, The Infiltrators.

With support provided to AIFF by a FilmWatch grant from the Academy of Motion Picture Arts and Sciences, Pride Award honoree B. Ruby Rich has curated and will host a series of four films on the theme of “Queer Intersectionality.” She will be joined by the renowned British media artist Isaac Julien, who will present his “New Queer Cinema” work from 1991, Young Soul Rebels, along with filmmaker Erin Palmquist (From Baghdad to The Bay) and, via Skype, Yance Ford (Strong Island). Rich will also screen and discuss Jim Chuchu’s 2014 Kenyan feature Stories Of Our Lives.Rich writes, “Today, with genderqueer and pansexual identities on the rise, a #metoo movement in full swing, and with more serious threats to people of color, women, queers and their allies than at any time since WW2, queer cinema is reclaiming its legacy of intersectionality—putting queerness in juxtaposition and dialogue with kindred communities and crossover issues of society, aesthetics, and culture. We are all mongrels today, and only the pure bloods and the blue bloods need fear contamination. With the Ashland Film Festival, I am delighted to be reclaiming an important legacy for our political and artistic future.”The Pride Award, supported by the Equity Foundation, is given annually to a leading figure in LGBTQ media, and past recipients include Barbara Hammer (2016), Jennie Olsen (2017), and Zackary Drucker (2018). The first film critic to be honored, B. Ruby Rich is a Professor of Film and Digital Media at University of California, Santa Cruz and Editor in Chief of Film Quarterly (UC Press), the oldest film journal in the U.S.A. As a renowned film critic and scholar, she writes widely in both the scholarly and academic press. Credited with coining the term “New Queer Cinema,” she is the author of New Queer Cinema: The Director’s Cut (Duke, 2013) and Chick Flicks: Theories and Memories of the Feminist Film Movement (Duke, 1998). 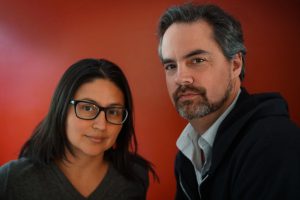 AIFF is also honored to present Rogue Awards to two special guests, Alex Rivera and Cristina Ibarra. The Infiltrators, co-directed by Rivera and Ibarra, won both the NEXT Jury and Audience awards at the 2019 Sundance Film Festival, and will screen at the Festival along with Rivera’s Sleep Dealer and Ibarra’s Las Marthas. Alex Rivera is a filmmaker who, for the past twenty years, has been telling new, urgent, and visually adventurous Latino stories. His work illuminates two massive and parallel realities: the globalization of information through the internet, and the globalization of families and communities through mass migration. Cristina Ibarra has been making award-winning films that explore the U.S. – Mexico border for the past sixteen years. Her most recent documentary, Las Marthas, premiered on Independent Lens in 2014. The New York Times called it “a striking alternative portrait of border life.” Rivera and Ibarra will be joined by filmmaker Peter Bratt (Dolores) and playwright Octavio Solis (Mother Road) for a TalkBack on April 12 titled “Art Against the Wall: Illuminating the Border.” The year’s selections include over 150 films chosen from more than eight hundred submitted to the festival, or specially selected by AIFF Artistic and Executive Director Richard Herskowitz. The entire program, including information about show times and tickets, live performances, art exhibits, filmmaker TalkBack panels, children’s programs, and more is now online at ashlandfilm.org. About Ashland Independent Film Festival The Ashland Independent Film Festival is a widely recognized and highly regarded film festival, screening 100-plus independently made documentary, narrative, animation, and short films at the Varsity Theatre, the Historic Ashland Armory, and the Ashland Street Cinema each April. Praised by filmgoers for the intimate access it affords to filmmakers, and by filmmakers for its warm and intelligent reception given to the filmmakers, the Ashland Independent Film Festival was named by MovieMaker Magazine one of the “Top 25 Coolest Festivals in the World” in 2016 and “Top 50 Festivals Worth the Entry Fee” in 2018. The National Academy of Motion Picture Arts and Sciences and the National Endowment for the Arts have each awarded AIFF with rare festival support grants. The 18th annual festival will be held April 11-15, 2019 and the 19th annual festival will be held April 16-20, 2020.