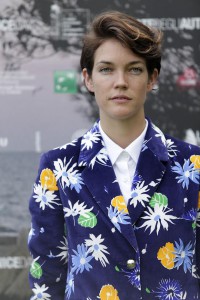 “Rowlson-Hall’s transfixing approach to filmmaking, which folds one art form into another, allows her to employ her body as a storytelling vehicle…” – Filmmaker Magazine

ASHLAND, OR – The Ashland Independent Film Festival has announced that the winner of its first Tangerine Entertainment Juice Award – an initiative to recognize and reward emerging female directors – will be presented this year to New York director/choreographer/writer Celia Rowlson-Hall.

The Ashland festival is one of a select number of film festivals to present the prestigious Juice Award, which includes a gift of $1,000 cash and four hours of consulting from the film distribution company Tangerine Entertainment. The award has been doubled by a generous matching gift of $1,000 from the Faerie Godmother Fund of the Oregon Community Foundation.

The Juice Award is given to a female director for her first or second narrative feature. Rowlson-Hall’s first full-length narrative, MA, will be screened during the April 7-11 Ashland Independent Film Festival, which includes 90-plus independent films, workshops, filmmaker discussions panels and live events. The southern Oregon festival celebrates its 15th anniversary this spring.

“Celia brings to cinema the same playful adventurousness that has made her a rising star in the dance world,” said Richard Herskowitz, Director of Programming for the Ashland Independent Film Festival. “We are extremely pleased to present our first Juice Award to this joyful and energetic new talent.
Festival audiences will have a chance to see her work when we screen her first feature-length film, MA, in which she retells the story of Mother Mary’s pilgrimage, setting it in the American Southwest and emphasizing movement over dialogue.” View trailer here. HammerToNail.com described the film as “astonishing … easily one of the most brazen and beautiful independent films I’ve seen in years.”

Rowlson-Hall, who wrote, directed and performs the lead role in MA, will receive her award during the festival in Southern Oregon.  “I am so honored to accept this award and truly appreciate the incredible support being given to me as an emerging filmmaker. Blending dance and film is a true passion of mine,” Rowlson-Hall said. “It requires many risks and fails, and I am so thrilled that nontraditional filmmakers such as myself are being supported and encouraged at this time. It is inspiring and invigorating to receive such an honor by Ashland, and I look forward to continuing to fuse these two forms in my future film endeavors.”

Rowlson-Hall, 31, began her career as a dancer and choreographer for theater but quickly embraced film when she was asked to help create the music video, Electric Feel, for American rock band MGMT.

Last year she was named one of Filmmaker Magazine’s “25 New Faces of Independent Film”. She has appeared on the cover of Dance Magazine, and has produced numerous pieces of choreography for
commercial ventures, including a Lena Dunham/Hamish Bowles video Cover Girl, that played onvogue.com to accompanied Dunham’s February 2014 Vogue cover. She also choreographs for HBO’sGirls.

Rowlson-Hall has also produced a series of short videos of her own, including the 2010 piece, Prom,which earned a coveted Vimeo Staff Pick Award. In this piece “she shapeshifts into various female archetypes, from Pamela Anderson to the Virgin Mary,” according to Filmmaker Magazine. View videohere.

The connection between film and dance is movement, according to Rowlson-Hall. “I think of filmmaking as choreography,” Rowlson-Hall explained to The Huffington Post in a recent article, “because even if it isn’t ‘dance,’ there is so much movement: How does the camera move? What is the quality of the movement? Should the movement be soft, harsh, etc. to best tell the story? How do the performers move? When I begin editing, there is an entirely new set of choreography: What is the pacing, timing, breath? Film is a dance for me.”

About the Ashland Independent Film Festival

The Ashland Independent Film Festival (April 7-11, 2016) is a widely recognized and highly regarded film festival, screening 90-plus independently made documentaries, features, and shorts at the Varsity Theatre, the Historic Ashland Armory, and the Ashland Street Cinema each April.

Praised by filmgoers for the intimate access it affords to filmmakers, and by filmmakers for the warm and intelligent reception given them, the Ashland Independent Film Festival was named one of the “Top 25 Coolest Festivals in the World” by MovieMaker Magazine, and has ranked in the top ten three years in a row for “Best Places to Live and Work as a Moviemaker in 2015, Top Towns.”

The National Academy of Motion Picture Arts and Sciences and the National Endowment for the Arts have each twice awarded AIFF with rare festival support grants. For details, visit ashlandfilm.org.

About the Tangerine Entertainment Juice Award

Tangerine Entertainment is a groundbreaking production company and community builder for media by women directors.  The Juice Fund is created by crowd-sourced, tax-deductible donations. The fund supports first or second time women feature film directors with mentorship and cash awards.

About the Faerie Godmother Fund

Since 2006, The Faerie Godmother Fund of The Oregon Community Foundation has awarded production grants, scholarships and sponsorships to more than 150 women in media in Oregon and southwest Washington.

Additionally, production grants and sponsorships have been awarded to individual filmmakers through WIF-PDX and other media organizations. The fund has been honored to support the work of Beth Harrington (The Winding Stream), Sarah Gertrude Rose Shapiro – trailer for Sequin Raze, Lynn Shelton (We Go Way Back), and Rolla Selbak (Three Veils) among many other talented filmmakers.