Ever wonder what it’s like to volunteer at the best film party in town? Longtime AIFF supporter, Marty Thommes, shares his GOD-like AIFF volunteer experience.

Who would not want to be addressed as the Armory GOD?

And yet, in human cultural history, God has had to carry a lot of baggage. Just think of all the images people have of God, or of many Gods… Then there are all the requests, prayers, confessions, intercessions, forgiveness… 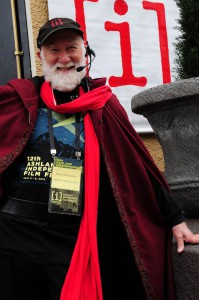 Same for the Armory GOD overseeing crowd control. What most people don’t know, is that in the AIFF vernacular, it stands for “Guy On Duty”. This may appear to be a downgrade – but not so! Ticket holders come with requests: to be let in early, to get out of the rain, to hold a ticket for a friend; starving, they pray for food entry, they pray we have their lost ticket, they confess they left it in the car or at home, they ask us to intercede with the manager, they ask for forgiveness for their forgetfulness.

So the Guy On Duty has to pretend he is all powerful, all merciful, all knowing. It’s a great pretense. But wearing a royal divine cape and hood, or sorcerer’s hat, and maybe long gray curls, can enhance the imaginary powerful deity. Like any god, he has to be careful not to let the power go to his head. And so the powers that be, insure that he has a pride-puncturing Jester at his side (supposedly for will-call).

And one of the best things about being GOD at the Armory is the great sense of camaraderie. The staff is like an army of Angels and there is even an Archangel named MOD (Manager on Duty); in reality, the MOD can tell the GOD where to go! This is not much different than the Church in which I grew up.

The only fear a Guy On Duty has, is that one day his place may be taken by a Gal On Duty!    But this is the fear of all male gods.