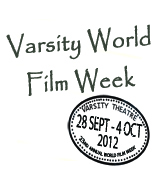 Varsity World Film Week, presented by Coming Attractions Theatres and the ashland independent film festival, launches on September 28th and runs through October 4th.  The week’s lineup includes a wide representation of world film, including documentaries and films not yet in release nationwide, and brings two incredible filmmakers to the Varsity Theatre in Ashland.

Special screenings of Russian documentary, A Bitter Taste of Freedom, brings renowned filmmaker Marina Goldovskaya to the Rogue Valley with her profoundly moving, politically provocative documentary about assassinated investigative journalist Anna Politkovskaya.  A Bitter Taste of Freedom screens 9/28 at 5:30p and 9/30 at Noon.  Goldovskaya will be present for Q&As after both showings.

Director Mark Kendall comes to Ashland with his illuminating documentary, La Camioneta, about the perils of everyday life as a bus driver in Guatemala takes the audience on a spell binding ride.  La Camioneta shows 9/28 at 8:15p, 9/29 at Noon, and 9/30 at 5:20p.  Kendall will be present for Q&As after each screening.

Don’t miss this chance to see these amazing films and visit with two talented filmmakers.   For more information on Varsity World Film Week, all the films screenings and to purchase tickets, visit Coming Attractions Theatres.