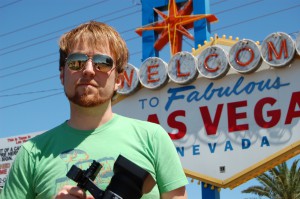 Bryan: A couple of things lead me to filmmaking. First, I was the Yearbook photographer. I spent all of high school taking photos and hundreds of hours alone in the darkroom. In my senior year of high school, I was an extra in the film Ten Things I Hate About You. I spent a month hanging out on the set with Heath Ledger, Julia Stiles, Joseph Gordon-Levitt and the rest of the crew and it was pretty exciting. I think I caught the film bug at that point and started making films instead of taking still pictures.

Bryan: I look up to a lot of documentary filmmakers. I really like Heidi Ewing and Rachel Grady’s work (can’t wait to see Detropia at AIFF). I like Kirby Dick, Errol Morris, Alex Gibney. Some of my favorite docs are a little quirky. I love King of Kong, Best Worst Movie and American Movie. I really like Chris Smith’s docs and wish he would do another!

Bryan: As a child, I didn’t actually watch a lot of films. I remember enjoying the John Candy flick Delirious and The Gods Must Be Crazy. I was more into baseball then movies at that point. Shockingly, we didn’t even have a TV in our house. And I definitely wasn’t watching documentaries.

Bryan: Castaway…But seriously, I think I would watch Office Space if I had to pick one. I’d want a comedy for sure to help deal with the situation.

Bryan talks HOLY ROLLERS: THE TRUE STORY OF CARD COUNTING CHRISTIANS: I knew going into this that we would have to be creative in the filmmaking process. Due to close personal ties with one of the founders of the team, the players agreed to allow cameras into their world. We had to make promises about how long we would wait before releasing the film.  We also had to agree in the end to blur the faces of certain members of the team as well as allow disguises for player interviews. The other hurdle was getting footage behind the tightly closed doors of the casinos. We were granted access to a few casinos and their key personnel. During the filming inside these casinos we were lucky enough to get some footage of a surveillance room, back offices, security cameras, and behind the scenes work of casino managers. The rest of the casino footage was attained through hidden cameras and personal camcorders of the players.

For more information on the film or to buy tickets, click here.