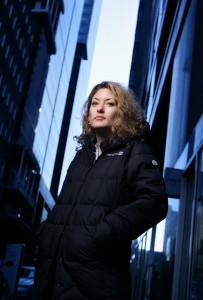 Here’s another from our Rogue Award recipient, Ondi Timoner!

Ondi:  When I was 19 and a junior at Yale, I asked my parents for a video camera and then set out across America with my brother and roommate on spring break. I interviewed people in toll booths and convenient stores about what makes them happy and what they fear most.  I wound up at the public access station, Citizen’s Television, in New Haven, Connecticut where my brother, David, and I edited my first doc ‘3000 Miles and a Woman with a Video Camera’.  (That title came from my asking a trucker what he feared the most:) I realized in that journey across the country that having a camera in my hand was a way of engaging people in conversation. It certainly made buying a soda and a bag of chips far more entertaining, as conversation and debate sparked wherever I went. My camera was a bridge into worlds I would have never have otherwise entered, and after that I never put it down.

Ondi: My favorite film as a child was actually Matt Dillion’s first film ‘Over the Edge’. It is about a group of kids growing up in an isolated community where many of their families had moved, in an attempt to keep their kids sheltered. But by trying to protect their teens from all potentially nefarious activity, they drove them to rebel. The very thing they were trying to keep their kids safe from was what these kids became. I love the style of the film, and as well, I suppose my attraction has played out in my films to follow, which inevitably explore the individual versus the group, and crowd mentality. Also, it was the first time I witnessed ‘kid’ culture. As a 10 year-old I looked up to these kids, their freedom of thought, and drive to live and feel in an environment that was oppressive was anthemic for me.

Ondi: ‘I Am Cuba’ because the imagery is so breathtakingly gorgeous. I would never get tired of it.

Ondi: In general, I am looking forward to Ashland because it is such a beautiful town filled with intelligent and curious people.   Also I am looking forward to the breaking boundaries conversation with AJ Schnack that will serve as a retrospective of my work, and also moderating the BYOD (Bring Your Own Doc) panel – because nothing is more enjoyable than meeting and exploring the work of fellow filmmakers. This will also be filmed for a special episode of my talk show, BYOD. Finally, of course, I am honored and thrilled to be receiving the Rogue Award for “fiercely Independent filmmaking!”

Ondi talks WE LIVE IN PUBLIC: In the beginning, I thought I would just make a film about “Quiet,” Josh’s millennial art project that took place in a bunker. I even edited a feature-length version of that film in 2000, which was never fully completed. It documented a moment of cultural history, but not the harbinger of things to come.  I looked around and realized that what I had documented back then was a physical metaphor of how people would react to the Internet, which Josh predicted would eventually take over our lives.  Everything I’d been documenting clicked into place and I understood what this film could, and should, be. Since then, I have never had a clearer and unwavering vision of a film I was making. I was so excited I could think of nothing else. I suddenly realized, just as Josh says in the film, that I had been ‘picked for the gig.

Don’t miss seeing Ondi while she is in Ashland!  Get your tickets now to WE LIVE IN PUBLIC and BREAKING BOUNDARIES: A CONVERSATION WITH ONDI TIMONER!