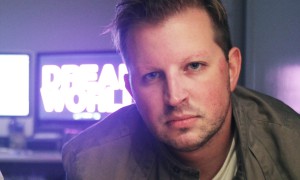 More from our filmmakers!  This time Ryan Darst, Director of DREAMWORLD, answers the burning questions.

Ryan: Sneak Attack was formed by Ryan Darst and Whit Hertford in early 2010, who previously worked together in sketch comedy.  After a long break from the weekly grind of making short video for their Youtube channel, Ryan and Whit, while punishing themselves at a Los Angeles Clippers game, decided to do something different.  Whit wanted to ‘get the girl’ and Ryan wanted to tell a story, and not be constrained by the strictures of a 30 second commercial or two minute comedy sketch.  Ten hours later, Whit sent Ryan the first draft of LONG STORY SHORT (AIFF, 2011).  Since then, Sneak Attack has made four short films and a feature, DREAMWORLD (AIFF, 2011).

Ryan: Our influences are many and steeped in the varied history of both cinema and theatre, but Sneak Attack’s mutual touchstones are Wes Anderson, Jean-Luc Godard and Woody Allen.  If you were to deconstruct it, Anderson’s theatre ensemble approach and quirky-character sensibility, Godard’s New Wave visual storytelling style, both in scene editing and overall arc form, and Allen’s commitment to honesty, improvisation and real-life subjects.

Q: If you were stranded on island, and had the ability to watch one film over and over, what would that be?

Ryan: If we were marooned on some forsaken island outpost, I would no doubt be trying to turn bamboo and seashells into a makeshift tropical risotto while Whit watches The Empire Strikes Back for the umpteenth time.

Q: If you are attending the 2012 AIFF, what are you most looking forward to in Ashland?

Ryan: Sneak Attack is returning to Ashland after a very inspirational visit in 2011, and can’t wait to see all of the passionate people involved with the festival again.  Staff matters!  Oh yeah, and some ale and meat pies at the Black Sheep won’t hurt, either.

Ryan talks DREAMWORLD: Sneak Attack’s goal is realism: contemporary stories done with a minimalistic crew and little production. The plan is to keep it intimate and fun from beginning to end. We are inspired by and draw from the styles of the French New Wave period/cinema verite genre which combines naturalistic visual techniques with stylized cinematic devices in editing and cinematography. We also embrace the principles of improvisation in both performance and execution to allow for genuine moments that focus on honesty and relatability.  These “roguemantic” films adhere to the fusing together of a miscreant, DIY attitude and the desire to not shy away from depicting what makes all of our hearts beat in an effort to unify story and audience.

For more information on DREAMWORLD, or to buy tickets, click here.