I first met Roger Ross Williams when he came to Ashland with his documentary, MUSIC BY PRUDENCE, shortly after he won an Academy Award for the film.  We had paired PRUDENCE with Steve Bognar and Julia Reichert’s THE LAST TRUCK: CLOSING OF A GM PLANT and Popeye, a subject of their film, was in town as well.  Roger and Popeye had not met before, but they hit it off right away, and their joint Q&As were a highlight of the 2010 festival.

I have stayed in touch with Roger since, seeing him at festivals, and always looking forward to a big hug and his warm smile. We talked about his new project, GOD LOVES UGANDA, and I was thrilled to learn that it would premiere at Sundance in January.  I had a chance to see the film early on, and the AIFF programming team was unanimous in our enthusiasm for this incredibly powerful, and infuriating look at the “role of the American evangelical movement in Uganda where American missionaries have been credited with both creating schools and hospitals and promoting dangerous religious bigotry. The film explores the evangelical campaign to change African culture with values imported from America’s Christian Right.” 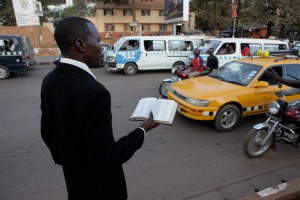 GOD LOVES UGANDA is a selection from the 2013 AIFF line-up that is not to be missed, and we are very excited that Roger will be back in Ashland this April for the Q&As.

Roger  is also a participant in the TRANSMEDIA 101: THE FUTURE OF STORYTELLING TalkBack Panel.

Tickets can be purchased for this film here