JPR and AIFF have been a natural fit from the beginning. When you want to know what’s happening in the arts in Southern Oregon, you tune in to JPR. When AIFF members and other patrons are asked how they heard about the festival and its lineup of films and special events, they always mention JPR. 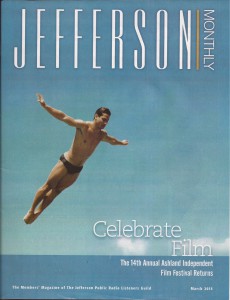 From the cover article in Jefferson Monthly every March to interviews with filmmakers on the Jefferson Exchange to year-round support of AIFF events such as the REEL to ROGUE fundraiser, Varsity World Film Week, and our annual Oscar® Night Gala, JPR always has our back.

Jefferson Public Radio began in 1969 when its flagship station, KSOR, was established on the campus of Southern Oregon University (SOU) in Ashland, Oregon. From a tiny 10-watt station, KSOR evolved to become a regional public radio network serving over one million listeners in Southern Oregon and Northern California. JPR has dozens of stations and transmitters bringing national public radio programs from NPR, CPB, PRI, and more, as well as locally produced shows such as the Jefferson Exchange via its three services: Classics & News, Rhythm & News, and News & Information, all of which also stream online.

Owned and operated by SOU, JPR extends the University’s educational mission by “promoting lifelong learning and fostering the intellectual growth and civic engagement of the region.” The network is named after the mythical State of Jefferson, which roughly corresponds to the listening area served by JPR.

A highlight of every winter is JPR’s Annual Wine Tasting & Silent Auction hosted at (AIFF sponsor) Ashland Springs Hotel that features a “wealth of wine to taste with over 40 regional wineries gathering to pour for over 400 guests.” The evening also offers fine food from a diverse group of regional restaurants and caterers, and the Silent Auction is always filled with incredible donations from area businesses, artists, and individuals.

Jefferson Monthly: JPR’s magazine is one of its most popular member benefits. With a circulation of over 10,000, it features “articles, columns, and reviews about living in Southern Oregon and Northern California, as well as articles about finance, health, and food from NPR.” Not to mention plenty of information about regional film festivals! Every March, the Jefferson Monthly features a cover article on the upcoming Ashland Independent Film Festival. This is the first chance Rogue Valley residents have to see the exciting lineup of films and special events for the latest AIFF.

A selection of Jefferson Monthly covers… 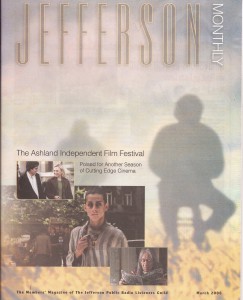 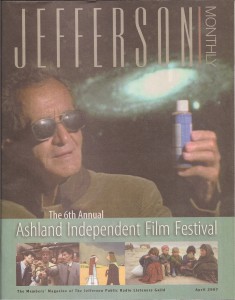 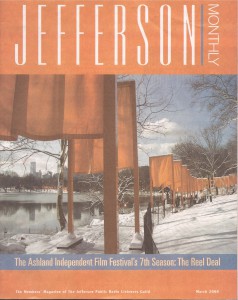 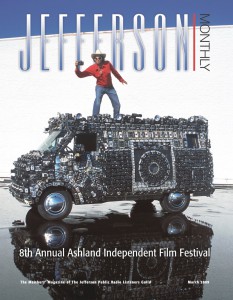 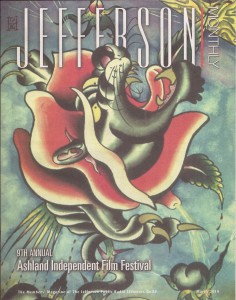 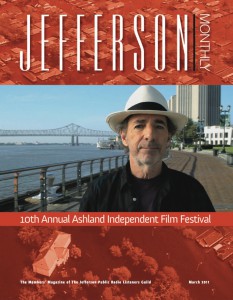 Jefferson Exchange: Interviews with AIFF filmmakers and special guests are another popular feature of JPR’s support. You can listen to interviews from recent years in the JeffEx archives: From AIFF15, an interview with Cartel Land (Honorable Mention: Best Documentary) director Matt Heineman, and Western (Les Blank Award: Feature Length Documentary) directors, Bill Ross & Turner Ross. From AIFF14, an interview with Lifetime Achievement Award honoree Barbara Kopple, and music from David Morris (who appeared in Kopple’s Harlan County, USA) and his son Jack. There are also interviews with filmmakers from last year’s 25th Annual Varsity World Film Week, including Sara Dosa, director of The Last Season and Marshall Curry, director of Point and Shoot. And listen to Andrew Mudge, director of The Forgotten Kingdom which received the AIFF14 John C. Schweiger Audience Award for Best Feature and returned to Ashland during the 24th Annual Varsity World Film Week. Plus here’s a gem from 2010: an interview with Roger Ross Williams, director of the Oscar-winning short documentary Music by Prudence (AIFF10), as well as AIFF13 Best Juried Documentary Feature God Loves Uganda. 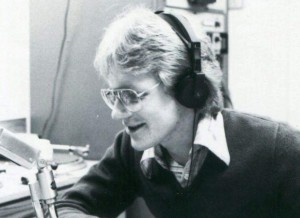 Back in the day, Tom Olbrich on air at JPR

The connections between JPR and AIFF run deep. Tom Olbrich is a former Jefferson Public Radio staffer, so when he became Executive Director of the Ashland Independent Film Festival, one of his first calls for sponsorship was to JPR Executive Director Paul Westhelle. Paul remembers it this way: “When Tom approached JPR, we were thrilled. Ashland is a film-loving community and we welcomed the opportunity to play a small role in creating a first-class film festival in Southern Oregon.” 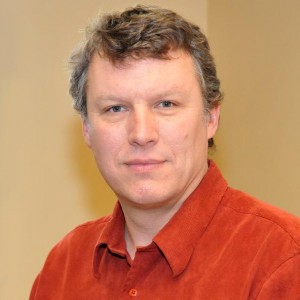 “Little did we know that the festival would grow into such a vital element of the region, contributing so meaningfully to our already vibrant cultural identity and creating a new economic development engine for our community. The Ashland Independent Film Festival is one of the special things that makes Ashland such a great place to live. Viva AIFF!”

It’s no wonder that here in the mythical State of Jefferson, JPR & AIFF live happily side by side.