Join us Thursday July 12th at 5:30pm and 8:00pm at the Varsity Theatre for LOCALS ONLY ENCORE — a special reprieve screening of five locally produced (and family-friendly!) films from the 11th annual AIFF. Read more… 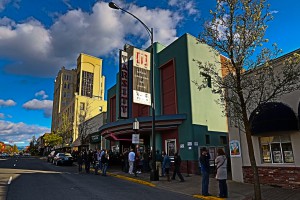 The ashland independent film festival is pleased to present an encore screening of locally produced films from the 11th annual AIFF on Thursday, July 12th at  5:30p and 8:00p at the Varsity Theatre in downtown Ashland. Tickets go on sale beginning June 28th at the Varsity Box Office and are discounted for AIFF members. The program is suitable for audiences of all ages.

Local filmmakers Ross Williams (Robot Love), Cici Brown (The Spirit Behind Bowmer in the Park) and Pat Somers (An Ordinary Life) will be on hand for an audience Q&A immediately following each screening.

Thanks to the generosity of our year-round sponsor Coming Attractions Theatres, ticket proceeds from both screenings will benefit the non-profit ashland independent film festival.

We hope you will join us for this very special “encore” celebration of local film and filmmakers!

Adults quickly become children when reminded of a favorite game.

The story of a robot’s crush on a young woman is told in reverse.

Don’t Eat Something If You Don’t Know What It Is!
(5 minutes)
Sergei Boutenko – Ashland

An educational rap about the perils of eating unknown plants showcased in a hip-hop inspired music video.

When a cracked beam closed the Oregon Shakespeare Festival’s Bowmer Theatre, the community came together to exemplify: “the show must go on!”

Help spread the word and join us in celebrating our local talent!