Next up in our Meet the AIFF14 Filmmakers, we talk with Gillian Robespierre, Director of Obvious Child. 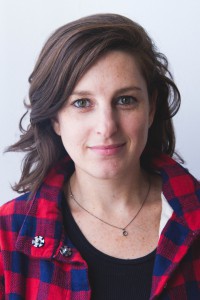 How did you get started in filmmaking?
Gillian: I can’t remember a time when I wasn’t obsessed with movies and the people who made them. I was a typical “indoor kid” who spent every weekend devouring movies and staying up to watch Saturday Night Live. In high school I was friends with the film nerds. I mean very cool dudes who liked to make horror films on the weekends. I was relegated to the role of the girl who gets killed. I never had any lines because I was a terrible actor) and I never contributed to the script because I was terribly shy. I have a vivid memory of one shoot where I was covered in fake blood observing the mayhem around me and thought “I could do this better”. That was the first time I realized I wanted to be a filmmaker and tell my own stories.

Who inspired you to become a filmmaker?
Gillian: What a question! I would have to say my entire family inspired me. I grew up with very funny; creative, smart parents and an older brother who to this day makes me laugh the hardest. Growing up I had dyslexia and encountered a few disgusting teachers along the way who made me feel incredibly small. But my parents never allowed that to affect me or my interests. We made short films together (directed by my dad). My dad was my first film history teacher, first person to explain blocking and instruct me on how to edit in-camera. They would even take me to the Angelika so I could get into PG-13 or R rated movies!  When reading felt like an impossible battle that I would never win I found a profound and life changing escape in movies.

If you were a superhero, what would your super filmmaking power be?
Gillian: So much adrenaline is pumping while making a movie I could really have used a good night’s sleep. So my power would be napping and my shoes would transform into pillows and my cape would be a blanket.

What is your go to Karaoke tune?
Gillian: Blondie’s “Call Me” and if it’s a duet Temple of the Dog “Hunger Strike” (I’m the Eddie  Vedder part).

What are you looking forward to most for your visit to Ashland?
Gillian: Walking around your beautiful city!

Gillian talks Obvious Child: Donna, played by the very talented and hilarious Jenny Slate, is a naturally funny, intelligent woman in her late twenties who is slowly shedding the remaining traits of her youth. I was frustrated by the limited representations of young women’s experience with pregnancy, and was waiting to see a more honest film, or at least a story that was closer to many of the stories I knew. Creating the voice of Donna was a collaborative effort with several exceptionally funny and intelligent women I know, including Jenny. We all have similar senses of humor, devour the same movies, and crave what all intelligent women crave: a romantic comedy that is Actually Funny. At the same time, I know that this is a serious and emotional issue. This is just one woman’s story, but it’s a story that we rarely see in mainstream media or our culture more generally.