Jeffrey Karoff, Director of the Oscar®-nominated short documentary CaveDigger, is the next #AIFF14 Filmmaker to answering our burning questions. CaveDigger plays in our Oscar Short Docs 1 program on Friday, April 4 at 9:30a in the Historic Ashland Armory. 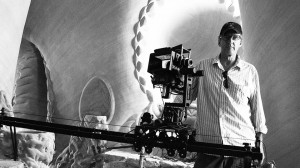 How did you get started in filmmaking?
Jeffrey: My father was a camera freak, and we had a 16mm Bolex as a home movie camera – far more technology than any family should own. Still, it piqued my interest in capturing images, which then dovetailed with my fascination with stories and music, and the emotional experience one could convey in a dark room with a lit screen. I shot my first film cut in camera, and it actually worked.

Who inspired you to become a filmmaker?
Jeffrey: Seeing Kubrick’s 2001 changed everything. The film was transporting in a way I’d never experienced, and I wanted to be able to do that. Still striving.

If you were a superhero, what would your super filmmaking power be?
Jeffrey: I would be able to stop time. Time is every filmmaker’s enemy. There is never enough.

What is your go to Karaoke tune? (AfterLounge Karaoke night 9p at Standing Stone Brewing Company)
Jeffrey: Since I play guitar in a band, I don’t do much Karaoke. Plus I have a wretched voice.

Jeffrey talks CaveDigger: I think Ra Paulette (subject of CaveDigger) has eschewed attention for most of his life. Even after almost 30 years of cave digging, he hasn’t really reached out to the wider public. He would tell me recognition was not important. He’s had many individuals say, “Your art has changed my life,” and he said, “In that way, I have gotten more important recognition than many artists who are famous. I don’t need more than that.” But there seemed to be something that was ready to be ignited in him about being recognized. Now that it’s happening, I think he’s liking it a lot.