Director Kevin Lacy, of YOUNG AMERICANS, is the next #AIFF14 Filmmaker in the spotlight. 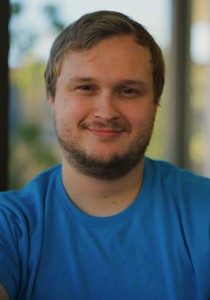 How did you get started in filmmaking?
Kevin: I’m one of those cliché filmmakers who nearly always dreamed of making movies. I remember getting very excited after seeing the movie Aladdin on the big-screen when I was seven or so, and dying to understand how someone possibly could have made that. How did they make Aladdin, the Genie and Jasmine move, sing songs, dance, and tell jokes? After whining about it for a while, my parents let me borrow their video camera and using chalk and eraser I would make just about the crudest (copyright-infringing) home animation versions of Aladdin (and Batman and the Ninja Turtles) you could ever hope to see. Later I took that same camera and made little movies with my brother, sisters and/or the neighbor kids, and later silly movies with my high school friends.

I didn’t start getting serious about trying to become a filmmaker until only about seven years ago when this American Idol-style reality show “On the Lot” was announced and the big prize was this deal with DreamWorks. As part of the application process you had to make and submit a short film. Mine was about a time-machine in a laundromat called “The Gentle Cycle”. It was rough and I’m sure didn’t come close to being selected but it did get me hooked!

Who inspired you to become a filmmaker?
Kevin: I’d say my whole family really, as my brother and sisters were always writing stories and doing creative projects but if I have to pick one person I think I’ll go with my dad. I have really great memories of my dad taking me to the movies, and he sort of had this reverence for them, and for the theater experience, which made it magical for me. He never really spoke about it but just going with him and the ritual of getting the popcorn (he had to have his popcorn) and sitting in just the right seat, and me feeling like a grown up for the evening, I think really got me excited about, and helped me become a believer in, the magic of movies.

If you were a superhero, what would your super filmmaking power be?
Kevin: The power to make money out of thin air so I could make whatever movies I wanted forever and ever.

What is your go to Karaoke tune? (Join us for Karaoke at the AfterLounge on 4/5 9p at Standing Stone Brewing Company)
Kevin: I’ve never done karaoke, but hmm I was in a band for a while and we used to cover “It’s Tricky” by RUN-DMC, which is an American classic, but I’d need a partner to do it right.

If you are attending #AIFF14, what are you looking forward to most in Ashland?
Kevin: I love Oregon so I’m excited to breathe some fresh Oregon air and to see a part of the state I’ve never seen before (my family used to vacation on the coast as often as possible when I was a teenager) but I’ve never been to Ashland! Also, looking forward to the panel with Ty Burrell, my wife and I are big Modern Family fans and he’s incredible.