Next up in our Meet the #AIFF14 Filmmaker series, Director Mark Raso of Copenhagen. 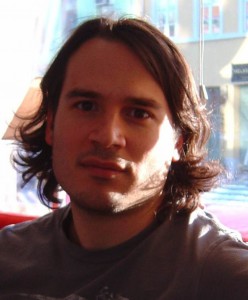 How did you get started in filmmaking?
Mark: My brother purchased a camcorder when I was 8 and from that time on we made short films on weekends. But it wasn’t until after undergrad that I realized being a filmmaker was something that someone could actually do. So I started volunteering on sets and tried to acquire as much knowledge and practice as possible.

Who inspired you to become a filmmaker?
Mark: Many filmmakers were my inspiration, but I think oddly enough Siskel and Ebert inspired me just as much. It was a show I watched every weekend and they really brought a new understanding of films to me. So they were as big of an inspiration as anyone else.

If you were a superhero, what would your super filmmaking power be?
Mark: To stop time.

What is your go to Karaoke tune? (AfterLounge Karaoke Party at Standing Stone Brewing Company-Saturday April 5, 9p)
Mark: Haha, I don’t have one. I’ve never done Karaoke. But if I did, it would probably be something by Nirvana, Pearl Jam or STP as a shout out to my youthful dreams of one day being a mega rockstar.

If you are attending #AIFF14, what are you looking forward to most in Ashland?
Mark: Unfortunately I can not attend the festival, I have to attend to the birth of my first child instead! But I hope to be able to attend one day. I just have to keep making films!

Mark talks Copenhagen: It was in a screenwriting class during my first year at Columbia University when I first sat down to write Copenhagen. I had the idea ever since I’d lived in Copenhagen in 2006 and my initial thought was to tell a simple story of two characters that meet and fall in love over a 24-hour period. In the three years from the first draft to my graduation — a mere two months before principal photography began — the story had changed in so many ways, and became tremendously personal. At its heart Copenhagen is about the difficulty we all have in shedding the burden of our parents’ past. But it is also a story about growing up. And in perfect symbiosis, the experience of filming it was also about growing up, yet the entire time, I felt imaginative, found joy in everything, and lived in the now, just like a kid.