We are thrilled to introduce you to Lucy Walker, our 2013 Rogue Award honoree and Director of THE CRASH REEL.

Make sure to get a ticket to all of Lucy’s #AIFF13 films, THE CRASH REEL and GOING FOR GOLD: OLYMPIC SHORTS WITH LUCY WALKER, and a ticket to the Filmmaker Talkback: Close-Up and Personal which she is moderating. 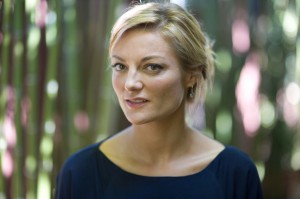 Lucy: As a child I loved acting in school plays, then I got very shy and started directing theatrical productions in high school, instead of acting in them. I carried on doing this throughout university where there were fantastically talented young actors, musicians and set directors to work with, and directed several ambitious productions, some of them elaborate musicals outside in the college gardens. I was just doing it for fun all this time, and meantime was a very serious student. Then one day someone brought me a videocamera and asked me to tape one of the plays I was directing. I was instantly hooked. It was so much fun to shoot the play, and I loved close-ups, pans, zooms. In a flash I realized that I would love to MAKE films, instead of watch films and make theater. In retrospect it made a lot of sense – I loved photography, literature, art, music, exploration, story, all the elements of films. But it wasn’t til pretty late that I thought I could do this myself. And then I had another inspiration – I used to think I had to work and do this fun theater stuff on the side. Then it occurred to me that work could be this theater stuff. That it was a possible career. Another lightbulb. I’m not sure if it’s because I’m female and there were so few role-models, or because nobody in my family was in the creative industries that it took me so long to think of this, despite my love of watching films…

Lucy: Oh gosh, too many people to name! I know who inspired me to apply to NYU film school were Jim Jarmusch and Spike Lee back in the day. I read that they had gone to film school and I loved the idea that I could study film — this was a very novel idea in the UK at the time. I managed to cash in all my academic chips to get a scholarship to go to film school — I’m still amazed I managed to pull that one off, it was one of my crazier schemes but somehow it all worked out and I got myself a ticket to NYU Grad Film school, which was a great place to learn from scratch, as I needed to do.

And as for documentary filmmakers – there are so many whose work has inspired me and continues to do so!

Q: What was your favorite film as a child and why

Lucy: My first film was The Jungle Book and that was very memorable. I was also weirdly obsessed with The Aristocats in case anyone can explain that to me. The Great Escape was the film I saw the most frequently, as it was replayed so much on British television, and I really enjoyed it. Then one day I switched on the tv and Apocalypse Now was on… now THAT was interesting. My father came in and switched it off, saying that a cow was about to be chopped up, which made me extremely curious…

Lucy: But… wait… why does this sound so familiar? Oh yes! This is actually my life! I’m stranded in a little island editing room, watching my own film for months at a time, with only my poor editor to watch it with me! So I don’t think I’d take a film, I’d just go swimming. Ok maybe a Kubrick movie, they are such masterclasses and I could watch them over and over and still learn something. Then again maybe not The Shining. I don’t think watching that over and over would be helpful in the circumstance.

Lucy talks THE CRASH REEL: I decided to make the film after meeting Kevin in 2010. He was recovering from his accident, and I was struck by both his incredible star quality and his vulnerability at that time. I was guessing that there would be a wealth of archival material out there, from home footage to competition footage to the crash itself. Tracking down and putting the pieces of the puzzle together was one of the most exciting parts of making this movie. The Crash Reel is so much more than a snowboarding film. It has all the thrills and spills and eye-popping scenes you’d expect, but it’s most resonant as a coming-of-age story about family, growing up, and learning to accept the most challenging of limitations. I didn’t know how it would end—for Kevin, or his brother David who has Down syndrome. I was thrilled on every level when their stories landed like the best snowboarding trick ever!