Welcome to the first of our AIFF Filmmaker spotlights!

All the filmmakers featured in this year’s festival have a wide range of interest and outlooks towards film.   We asked the burning questions, and they answered. 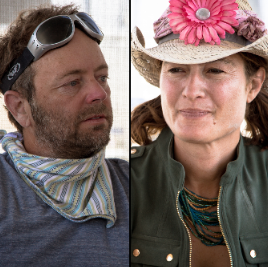 First up, Jessie Deeter, the Co-director of Spark: A Burning Man Story.

Q. How did you get started in filmmaking?

Jessie: An old boyfriend introduced me to documentary films long ago with a black and white documentary called “Freaks.” I was fascinated, but never thought that making films was something I could do until I was a student of Jon Else (we call him “the Master”) at UC Berkeley’s graduate school of journalism, which worked with PBS’s Frontline to give students practical internships working on their documentaries. I started as a PA and worked my way up from there.

Q. Who is your favorite independent filmmaker?

Jessie: I don’t have only one favorite filmmaker–there are so many! I’ve learned a lot from watching Errol Morris and Werner Herzog’s films. I was lucky enough to work a little bit with Alex Gibney, whose is extremely good with story and structure. I greatly admire the way Lucy Walker and Ondi Timoner get at character. But what Joshua Oppenheimer has just done with “The Act of Killing” has me still reeling. Like Errol did, he’s cracked open a new grammar for documentary filmmaking that forever alters how we documentary filmmakers think about how our characters can tell their stories.

Jessie: I must admit that I was a John Hughes, “Breakfast Club” kind of girl. Because I identified with each of those characters (except maybe the jock) and fell in love with Hughes’ version of Romance.

Jessie: It would either be “Man on Wire” or “Life of Brian.” I view both as perfect films.

Jessie: I am most looking forward to simply being in Ashland. I’ve never spent any time there, and other documentary filmmakers have highly recommended it to me as a gorgeous and fabulously welcoming place for filmmakers. I’m also looking forward to seeing as many movies as I can, which I view as professional training.