Welcome to the first of our AIFF Filmmaker Spotlights!

All of the filmmakers featured in this year’s festival have a wide range of interests and approaches towards filmmaking.   We asked the burning questions, and they answered.

First up, we talk with Ben Cotner and Ryan White, Co-Directors of the AIFF14 Opening Night Film, The Case Against 8. 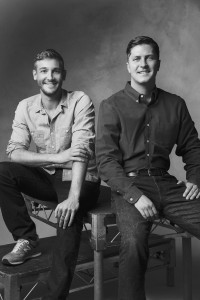 Ryan White, Ben Cotner. Co-Directors of The Case Against 8.

How did you get started in filmmaking?
Ryan: I was always a film nerd growing up, and I was a photographer all through high school and intended to do that as a career. I ended up at Duke University, which has an amazing place called The Center for Documentary Studies where you can study all nonfiction mediums. I discovered that documentary filmmaking was the combination of my two passions and ran with it.
Ben: I had always loved documentaries and wanted to make one (especially having worked on the distribution side on such great ones as An Inconvenient Truth, Mad Hot Ballroom and American Teen), so I was always looking for the right story. When I heard that Ted Olson and David Boies were filing a lawsuit challenging the constitutionality of Proposition 8, I jumped at the opportunity to start filming. Here were two of the great legal giants of our time working together to convince the Supreme Court to make one of the most historic civil rights rulings of our generation. Having a lot of vacation saved up, I just decided to go for it.

Who inspired you to become a filmmaker?
Ryan: Agnes Varda and Jeff Blitz. I can specifically remember being in the theater to see both The Gleaners and I and Spellbound during the same semester for a college class — I became a junkie for documentaries and was so excited about the range of the types of stories you could tell with them.
Ben: I spent ten years as an executive and was privileged to observe up close a lot of amazing filmmakers in action. After seven years at Paramount, I went to Open Road Films and was the luckiest kid on earth to work on films with directors like David Ayer, Joe Carnahan, Steven Soderbergh, Andrew Niccol, Jon Favreau and many other amazing filmmakers. I learned a lot just sitting back and watching these great minds at work and I think that being around these creative forces really reminded me every day how powerful the medium of film could be and pushed me to make the leap to filmmaking.

If you were a superhero, what would your super filmmaking power be?
Ben: Maybe Captain Stubborn? You should ask Ryan…
Ryan: My superhero would be being able to finish a film without doing archival research or music licensing — let’s just say those are not my two favorite parts of the process. (So perhaps my superpower would be to always have a budget for a Researcher and a Music Supervisor.) Also, time travel.

What is your go to Karaoke tune?
Ryan: 90’s country, which nobody wants to hear except me.
Ben: Duh. Going to the Chapel…

What are you looking forward to most for your visit to Ashland?
Ben: I always look forward to screening the film in states where marriage still isn’t legal, especially one like Oregon that seems so close. I really look forward to the conversations that come out of our screening, but I also will be doing my best to see some of the other great documentaries that are playing.
Ryan: I have somehow never been to Oregon! Excited to see the state for the first time and participate in a festival which I have heard such endearing things about but have never had the chance to visit.

Ryan and Ben talk The Case Against 8: In November 2008, our fellow Californians passed Proposition 8, taking away the right of same-sex couples to marry. Within weeks, the American Foundation for Equal Rights (AFER) was formed to fight the proposition and bring the first federal challenge to a state’s same-sex marriage ban.
We approached AFER about documenting the process of the legal challenge, with no way to know how far the case would go. Over the past five years, we’ve spent countless emotional days and sleepless nights with the attorneys and plaintiffs, capturing over 600 hours of footage as they took their case to the Supreme Court.
We are extremely grateful for the incredible access we’ve been given since the beginning, which allowed us to explore issues of bipartisanship, civil rights, privacy, and dignity. It is our hope that THE CASE AGAINST 8 will give audiences the opportunity to experience this historical journey in an in-depth and intimate way.

Purchase tickets to The Case Against 8.