Our filmmaker spotlights continue with Tim Cawley, Director of From Nothing, Something: A Documentary on the Creative Process. 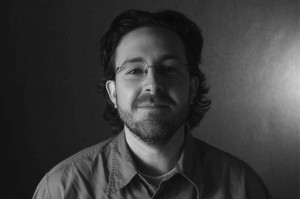 Q. How did you get started in filmmaking?
Tim: My “day job” is in advertising as a writer and Creative Director. In that role, I get to write scripts, do boards, cast, scout, go to the shoot, cut, edit, mix, transfer. It’s a great film school. Even if you’re only putting out 30 or 60 seconds of film at a clip.

Q. Who is your favorite independent filmmaker? Or who do you look up to in the independent filmmaking world?
Tim: I tend to love a lot of director’s first films: the scrappy ones they made against the odds when they had no resources. Kevin Smith’s Clerks. Sam Raimi’s Evil Dead. Duncan Jones’ Moon. Darren Aronofsy’s Pi. Shane Carruth’s Primer. Christopher Nolan’s Following. Those directors aren’t all so “indie” now, but they scratched and clawed to eek out that first movie.

Q. What was your favorite film as a child and why?

Tim: Willy Wonka and the Chocolate Factory. Kind of a musical. Kind of horror (those Oompa Loompas gave me nightmares). Kind of Sci Fi. Kind of a Fairy Tale. A little bit of everything. And I loved that the hero wasn’t a clear-cut good guy. I’ll still watch that film if I’m clicking around and it’s on the TV.

Q. If you were stranded on an island, and had the ability to watch one film over and over, what would that be?
Tim: Something long and epic would make sense. A little funny to keep my spirits up until I got rescued. Maybe something a little sexy to help fight off the loneliness! Probably Boogie Nights. Though I’d try to sneak Goodfellas, Mulholland Drive or Pulp Fiction on to the island in a hollowed out coconut.

Q. If you are attending the 2013 AIFF, what are you looking forward to most in Ashland?
Tim: Never been to Oregon before. Never been to the Ashland Film Festival before. People say the most amazing things about both. Plus, this will be the first time our composer Conan Skyrme and his brother Tom see the film in a theater with an audience. Can’t wait to hang with them, as they’re traveling from Los Angeles and London respectively. It’s gonna be like indie film Spring Break for us.

Tim talks From Nothing, Something: This film is a record of what essentially a two-year “creative guy fantasy camp” where I met sixteen intelligent, interesting, strange, frustrating, inspiring personalities. We shot when we could get access, when folks were in the middle of a big project, or “in a groove.” We distilled hundreds of hours of footage. In the editing process, a funny thing happened: On those occasions when we lost our way, the film became the roadmap to actually finishing the film. That’s when I suspected we were on to something. It wasn’t just entertaining, sad, funny, etc. It was useful.

In hard, uncertain times, people can get practical and conservative. Being creative can be seen as a luxury or even foolish. But what I want viewers to learn is this: Creativity be a prudent, profitable, productive and glorious thing. And it’s not just for “geniuses.”

People use the term “flash of inspiration.” But in conducting my interviews, I discovered there’s just as much hard work, diligence, trial and effort that goes into creativity. Achievement doesn’t come in one glorious, overnight, American Idol-esque “congratulations you’re famous” moment. It’s a workaday mix of talent and effort. And it’s achievable, to some extent, by most everybody.

Buy tickets to the film here.  More spotlights to come!