ASHLAND, OR. – Nine films by local filmmakers are Official Selections in the 15th annual Ashland Independent Film Festival’s Locals category. The nine films chosen are all shorts or short documentaries created by filmmakers who live in the Siskiyou region.

•             Philip Kumsar, of Jacksonville; Jameson Collins, Lauren Dahl, and Violet Crabtreee, all of Arcata, CA., for The Giantess, an adaptation of a comic by Crabtree. 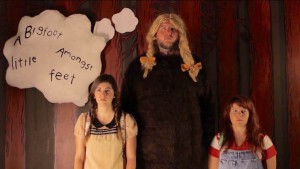 “Our team of programmers was particularly impressed with these nine films, but the choice was tough, with a record number of submissions and so many strong entries to the festival this year,” said Richard Herskowitz, director of programming. “We hope that our local audiences will recognize the talented filmmakers among them and come out to cheer them on.”

Kumsar, who submitted The Giantess, noted that the film was a project of passion: “We are beyond thrilled to be involved in a film festival.”

Every year the Ashland Independent Film Festival presents local films for free to the public in the Locals Only program, but tickets are required.  Deadline for submission is December and entry is free for residents of eligible counties within the Siskiyou region: Coos, Curry, Douglas, Jackson, Josephine, and Klamath in Oregon; Siskiyou and Del Norte in California.

Details about screening times of all films will be available on the festival web site: ashlandfilm.org on March 16, when the full program is announced. There will also be a free Festival Preview Night, with festival highlights and film trailers at 7 p.m. on March 15 at the SOU Music Recital Hall off of South Mountain Ave., Ashland, OR.

About the Ashland Film Festival

The Ashland Independent Film Festival (April 7-11, 2016)  is a widely recognized and highly regarded film festival, screening 90-plus independently made documentaries, features, and shorts at the Varsity Theatre, the Historic Ashland Armory, and the Ashland Street Cinema each April.

The National Academy of Motion Picture Arts and Sciences and the National Endowment for the Arts have each twice awarded AIFF with rare festival support grants. For details, visit ashlandfilm.org.