Serving Southern Oregon and Northern California, SOPTV is our local PBS member station and a leader in promoting local programming in educational and informational media. Along with such well-known nationally produced PBS shows as the PBS NewsHour, Charlie Rose, and Sesame Street, SOPTV carries and creates local programming, including The Jeffersonian (a collaboration with the advanced video class at Southern Oregon University) and Stories of Service, about U.S. military veterans. Film festival supporters may recall the July 10 episode on The Jeffersonian about making feature films within the State of Jefferson. SOPTV also airs the online PBS Film Festival and offers many programs online via its website at soptv.org. 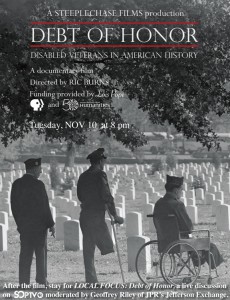 Between now and Nov. 5, JPR’s morning show, The Jefferson Exchange, will discuss the documentary and will have the director (yes, he’s the brother of Ken Burns) on the show at 8:30am, Monday, Nov. 9. After the documentary airs on SOPTV, a panel of experts will discuss local veterans’ issues and how the community can get involved. Details about show times and scheduling for all of these events, as well as a trailer of Debt of Honor are on the SOPTV Local Focus web page. 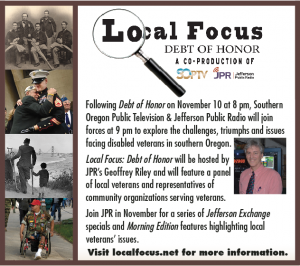 SOPTV supports the Ashland Independent Film Festival by airing TV spots and online ads to promote the April film festival, our regional student LAUNCH contest, and the Varsity World Film Week, held annually in October. These efforts help meet SOPTV’s goal to foster an informed citizenry and to spread the word about the life of the arts, sciences, and humanities available to the public. SOPTV and AIFF work as partners to bring independent film to the widest possible audience. SOPTV and AIFF have been proud partners in the visual arts since 2007.