Wendy Conner, Senior Programmer and Operations Manager, shares her unique experiences of going to “the Dance” for the very first time.

Lucky me!  After years of being the bridesmaid, it was now my time to walk down the aisle and be the bride.

It was happening, I was going to Sundance! 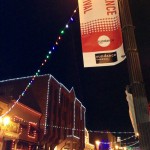 Before all of the media frenzy and hype, I went on a self-imposed crash course in researching how to “do” Sundance.  Poring over the film schedule, researching the shuttle routes, scrutinizing the locations of the bars (and yes, I even Googled, “What to wear to Sundance”); I wanted to fully prepare myself for optimal enjoyment, with all of the right clothes, of course.

Each chilly but gorgeously sunny morning, equipped with my Industry Pass, protein bars and super cool, fur-lined boots, I walked with fellow Programmers, Darrel and Joanne, to the shuttle stop. From there, we boarded, huddled and then scattered to our various theatres in and around Park City.

Because I had an Industry Pass, my screenings were at the Holiday Theatre which was exclusive to Press and Industry folk – you know – the people who are really there to work.  We do not mingle with the glitzy-glamour types, we care not about which A-list celebrity has been sighted and whether or not they are wearing a slim-cut peplum puffy jacket with faux fur. We are singular in our purpose, and that is to screen films.

Here’s how it works: 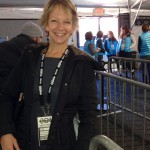 Wendy waiting in line for her next film. Behind her stand some of the 8,000 volunteers in their billowy blue vests.

You enter the (heated…ahhh!) tent outside the theatre, get on line for your film, wait, get out your cellphone, look completely absorbed and aloof while surfing Facebook, wait, maybe take a selfie, wait some more, eavesdrop (and occasionally drop in) on multiple film-geek conversations happening all around you, grab a few bites of your protein bar, wait a little longer, jot a few notes down about the film you just got out of, and then…boom, your line starts moving and you’re headed into the theater. Grab the most comfortable spot in your go-to row, take out your cellphone and excitedly text all of your friends to tell them that you’re sitting right in between the Director of the Sarasota FF and a couple of staff writers for IndieWire. Oh and right behind you is the Producer of the film you’re about to see – just imagine their jealousy!

Upon completion of the film, you exit the theater and then do all of that all over again. Rinse, repeat five more times until the end of the screening day. Get up tomorrow and do it again and

recognizing that it is both a privilege and an honor to represent your festival here, at the epicenter of all that you love about the alchemy of a film festival and the art of independent films.

Random first-timer observations about the juggernaut of what is Sundance: 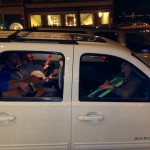 A bluegrass band makes their home in a Suburban.

Oh and how could I forget to mention that I SAW 36 FILMS IN 6 DAYS‼‼ Can’t wait to do it again next year.