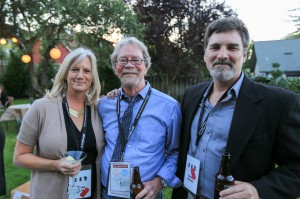 I have come to Sundance since 1996, first as a film nerd and then as an AIFF Programmer for the last 10 years. I am not a winter person—I am fine with the Oregon cold and rain, as long as I am inside with a great movie or book and can watch it all come down outside.

Each year as the dance approaches, I am simultaneously excited by a return to Park City and anxiously checking weather reports so I can plan my wardrobe: suitably black and artsy with lots of layers to keep me warm. Heading toward the snow is not my idea of a good time, unless that snow is on the Wasatch Range and I will be joining 50,000 of my new best friends to see as many films as possible in a week.

Fashionably suited up, I headed out on Day One, serenely calm in 16 degrees. My partners in crime for the week: Joanne Feinberg, AIFF Director of Programming and Wendy Conner, AIFF Director of Operations and Senior Programmer. They were excitedly talking about the day’s schedule as I stepped onto a small patch of ice. BOOM. Suddenly I was flat on the ground, eyeglasses askew, a new bump on the back of my head, filled with the vain humiliation of all pratfalls. Just as suddenly, I was back on my feet, assuring all that “I am fine, happens all the time, it’s cool.” Everything seemed intact but tweaked and I was not going to let this interfere with the first day.

Jo and Wendy had Press & Industry passes, providing access to most of the films in a venue removed from the celebrities, the glitz, and the glamour. My role was to be more of a floater, wait-listing available programs of interest with a focus on Short Films and Documentaries. With no hard tickets for the day, I had woken up early to get an eWaitlist number, which you get from the Sundance app on your phone. Exactly two hours before the film starts, the waitlist opens, you push enter, and twenty seconds later you have a number. It is an algorithmic lottery. I got #46 at a big enough venue that my odds were pretty good. You must arrive a half-hour before the start and negotiate with the crowd to find your place in line in proper order. 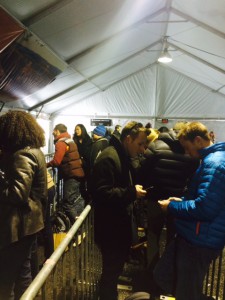 Finally the gates open and you move up the line with cash in hand, ready to find the random empty seat. Not so fast hombre—only 25 people get in. It must be said that the opening weekend is the most crowded and waitlist odds greatly improve after the first couple of days. I wander over to Sundance Headquarters consulting the film guide for the next possible program to waitlist. Over a cup of coffee, I see a Shorts Program that will open in fifteen minutes. Index finger poised, I count down the seconds…#23 and YES I got in and was rewarded with a set of unique short films. But that was it—I tried the eWaitlist four more times that day but without success. Sometimes you get the bear and sometimes the bear gets you.

Along with the glam, the glory and the STARS that we all read about at Sundance, there is a parallel universe where most of us operate. It doesn’t include premieres, posh parties, or fancy swag. But it does immerse you in a unique community of filmmakers and film lovers on a natural high that you are eager to share. You might not get in to the film you “have to see,” but if you are open, you will discover some magic moments never to be forgotten—at the movies and around town. Whenever I am in line or on a seemingly interminable shuttle ride, I eavesdrop and strike up conversations with strangers, which opens doors I didn’t know existed. Most everyone is here for the love of film; you have that in common—endless possibilities abound.

One year on the shuttle, I sat next to a lanky Irish guy who I kept talking to just to fill my ears with his lilting brogue. It turned out that he was a filmmaker with a short in the program that was as charming and affable as his accent. Before he got off the shuttle, we exchanged cards and he gave me a DVD of his film. That delightful film was included in the AIFF program that year and was an audience favorite.

This year, while waiting in line, I was delighted to find myself standing next to a filmmaker who has screened two great documentaries in Ashland. We bonded over favorite films and news of his latest work. The wait in line went quickly and we sat together for a chilling and immersive documentary that will hopefully screen this April in Ashland. 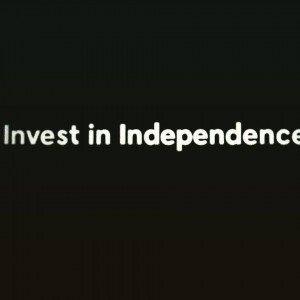 My luck improved as the week progressed. Between hard tickets and good waitlist numbers, I was rewarded with many memorable films. I also made great connections with filmmakers, fellow programmers, and strangers who are now friends.

Each year I make time to go for a walk between screenings whenever possible. Weather permitting, this is a perfect way to take in the snow-covered slopes as you reflect on what you just saw. This is a chance to cleanse your movie palete or blow the stink off, depending on your last experience. What I have learned over the years is simple: be in the moment, pay attention, get out of your email, Facebook, and IndieWire and just breathe. Not all of the movies are on screen.